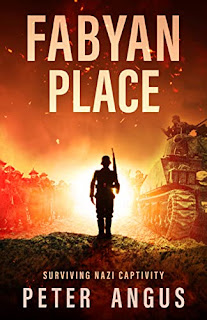 For those who think America is perfect or that the so-called Greatest Generation was without sin, this book will be an eye-opener.

A young American, Sonny, goes to war and confronts his prejudices, forming an unlikely friendship with another soldier, John, first in a German POW camp and then in a slave labor camp. They each know a secret about the other that would be a death sentence if the Germans found out.

Despite their differences, both in appearance and beliefs, the two form a sound bond. A bond that remains strong in the face of the treatment they receive at the hands of their captors. Sonny enthrals those in camp with his tellings of Christmas banquets at his house, and his promise to host them all keeps their spirits up amid the torture and starvation they endure.

The veteran returns home and is confronted by echoes of his captivity on a Christmas morning when an enigmatic visitor arrives unannounced.

While the holiday feast is being prepared, the unexpected guest provokes dark memories of the war, the horrors of the camps, and the life-altering changes in the soldier’s own psyche.

The secrets the visitor will bring with him will have far-reaching effects and change perceptions and behavior alike. And the reality of racism on both the German and American sides during the Second World War as well as how American soldiers endured the evils of a prison whose purpose was Vernichtung durch Arbeit: “annihilation through labor” will be confronted head-on.